I love the Google Photos movie maker, but it is missing some vital features.


What is Google Photos Movie Maker?

If you take lots of photos and videos, you need better ways of combining, presenting and sharing them. Have you tried the movie feature in Google Photos? There is no easier way of making a movie out of your photos and video clips than using Google Photos Movie Maker capabilities. Sometimes Google Photos even makes a movie for you and gives it to you in the For You section. No work at all! Even when you make the movie yourself, it is drop-dead easy. On your mobile device, select the photos and videos you want included, tap the + button in upper right and choose movie, then you can save, or make a few edits.
Here's a video to show you how:


What features are missing?

In the current version of the movie maker,


Movie made with Google Photos in 2015 includes missing features.

These features actually existed when Google Photos first came out in 2015. Here is a movie I made back then to prove it - pay attention to the movement between slides and in the photos themselves. You will see the pan and zoom motions, aka the Ken Burns effect.

At the end of 2015, Google bought a company called Fly Labs. Fly Labs was a video editing company and there was great excitement that Google Photos would be getting a lot more movie making and video editing capabilities. They first implemented the Fly Labs software into Google Photos sometime in 2016. The interface changed a lot and it is easy and elegant, but the transition, pan/zoom, and titles were gone. At the time I said, "That's ok, I'm sure it's coming."


Where are the video editing improvements?

It's been FOUR YEARS! Where are the features we had before? Let alone any new features like slow/fast motion and voice over?
You know I love Google Photos, but I'm starting to recommend other apps for making movies. Here is our YouTube show where we demonstrated Filmora Go. 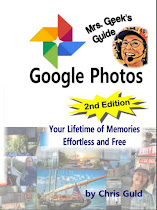